Who was Baron Osy? 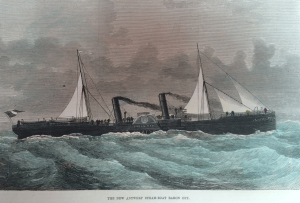 Well, in our case, we are actually more interested in what, not who. The Baron Osy was a luxury paddle-wheel steamer  operating in various incarnations between London and Antwerp during the latter half of the 19th century. Of the ships mentioned in the memoirs, it was the only one I could find any information about so I am guessing it was quite well-known. In fact, one newspaper article from the time states “The Baron Osy has become almost a household word in that part of the Continent.” I found a similar sentiment in a free e-book, The Family Guide to Brussels from 1871, which also gives interesting insight into 19th century traveling habits:

There are now many facilities afforded for reaching Brussels from London by the various routes; but at one time this well known Belgian boat was the most popular way of so doing. The travelling public are also apparently less exclusive in their patronage at the present day; and a journey thither no longer means a pleasant sail down the river on a Sunday morning; a capital dinner and a bottle of wine with a “bon vivant” Captain at the head of the table, and merrily reckless of the ” mal de mer” to follow. Passengers now are more chary of their time and stewards’ bills, which it must be remembered on any of the boats occupying much time in the voyage, form no unimportant item in one’s travelling expenses. The Baron Osy, nevertheless, is too comfortable a vessel not to be able to command at all times a full share of patronage from those who choose this route. She leaves St. Katherine’s wharf at 11 o’clock a.m. on Sunday, arriving at Antwerp the next morning, and returns at mid-day on Wednesday.

The original Baron Osy was built in 1840 and ran until 1874, with a short break in 1863 for repairs after it was sunk in the Thames River. A photo of this ship can be viewed here and is the vessel that Onkel Hayn would have taken on his trip to London from Frankfurt in 1868.

It was replaced in 1875 by a completely new ship with the same name (see photo above). A newspaper article from the time describes it thus:

The present vessel has been built and fitted with all the improvements which long experience in the service has suggested. Her principal dimensions are – length, 245 ft. over all, 30 ft. beam, 15 ft. depth. She has a long, full poop* (unusually lofty and well-ventilated), fitted up in a sumptuous manner for first-class passengers, with a large smoking-cabin on deck. She has a bridge-deck extending the full length and width of the wing houses, forming together with the poop (which is connected by a gangway), a splendid promenade for passengers. The whole of the space under the bridge is fitted for the carriage of horses; arrangements are also made for carrying cattle. In the fore part of the vessel very comfortable and airy accommodation is provided for second-class passengers.
* the poop is the cabin at the aft of the ship

Sounds like not a bad way to travel, as long as the horses and cattle don’t smell!

(BTW, in case you were dying to know, the human Baron Osy held various political offices in Antwerp)

or I Wish Onkel Hayn Had Worn a Pedometer

Sometimes I wonder if one of the reasons Onkel Hayn lived so long was due to the fact that he didn’t shy away from using his own feet to get him from point A to point B. Maybe some of it was out of necessity, but I suspect he actually enjoyed walking. One of the first examples that caught my eye was his description of walking almost every Sunday from the train station in Den Haag to Scheveningen, a distance of 4.5 km. The fact that he refers to it as a “Spaziergang” (a leisurely walk), and gives such a pleasing description of his surroundings, makes me think it was not all drudgery for him.

“I would depart by train at 8 a.m. and travel via Schiedam and Delft to den Haag; then I had a one-hour walk, first through the immaculate and friendly capital city and then on a shady country road, before I reached Scheveningen.”

Another example, the one which gave me the title of this post, is when he says that the walk from Thames Ditton (where his brother had his summer residence), to Kew Gardens and Bushy Park, were “leicht zu erreichen.”  Granted, there may be a misunderstanding somewhere, but according to Google it would take two and a half hours to make this trip. Hmmm……  In any case, my guess is that it was almost certainly close to two hours.

And here’s my favorite, partly because I know the stretch well, and partly because I find it so amazing. It describes the day he traveled from Zermatt to Martigny, much of it on foot. I can only imagine how unpleasant it must have been for his female companion to walk in a dress, which then became soaking wet!

“Accompanied by a couple I had met while in Leukerbad, a lawyer from Kassel and his amiable wife, I left Zermatt. We had lunch in St. Niklaus and walked on to Stalden, where we made another stop. But then a storm broke upon us and we were forced to march 2 hours in wind and weather to the train station in  Visp;  from there we continued by train to Martigny which we reached towards evening.”

These are only a few of the many examples one can find in the memoirs if one starts looking. I imagine even his daily work routine involved a lot more walking than we “moderns” would ever consider doing…..  in fact, in closing I would like to share a few lines from this post  http://thesmartset.com/article12211201/  by Wayne Curtis, contributing editor to The Atlantic. He has a lot of interesting things to say about the way our ancestors walked (and several more posts on the subject as well!):

America was once the land of the long walk, at least if you didn’t have the means to ride a horse, or, starting around 1900, to drive a car. We walked and walked, and in the process both learned and told our own stories and that of the land around us. Walking stitched together our nation with tight, durable seams, not like high-speed highways that render stitching that’s sloppy, loose, and easily undone.
Undertaking a 10- or 15-mile walk was once something Americans might do routinely in an afternoon. No special note was made of it. In 1906, just as cars were coming into vogue, the nation was afflicted by a small outbreak of long-distance walking — multi-day walking races and long-distance walkers seemed to be tromping everywhere. A splenetic editorial in American Gymnasia magazine took a dim view of the attention being lavished on the long-distance walks. “It is simply another mark of the degree of physical degeneracy (is that too strong a term?) of the present day that long walks are uncommon enough to excite special attention — not 1,200 mile walks but even 50-mile trips. And for most of us ten miles is a distance to cover which we must use much effort, and having made it are quite sure to indulge in self-praise.”

Needless to say, I fit into the latter category!