German handwriting in the 19th century 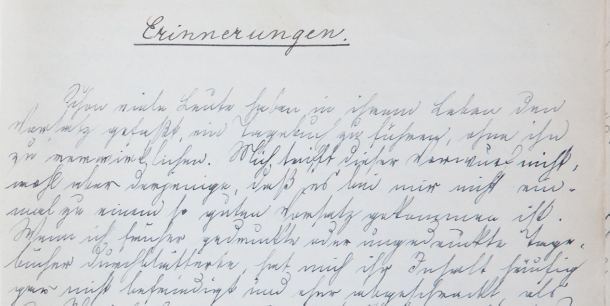 Had it not been for my husband’s maternal grandmother, who arduously typed Onkel Hayn’s written manuscript shortly before her death, his words would most likely have forever remained locked in a dusty book on a shelf. I can assure you that no one else in the family would have tackled the task of deciphering 300+ pages of “Kurrent” without knowing in advance if it was worth the effort involved. And in fact, even though I spent many hours unraveling the mysteries of incorrectly transcribed words and names, I still feel like I am hardly any better at it than I was when I started.

So what exactly is this handwriting style, and why is it so difficult? For an answer to the first question, I would suggest a look at the excellent post, “Kurrent – 500 years of German handwriting” by Ralph Hermann. He explains that Kurrent is essentially the handwritten counterpart to the typeface Blackletter (think Gothic script), which gives it an “edgy” look, as opposed to the more curvaceous Roman cursive, which has Roman block letters as its typeface relative. He also includes examples showing how the script evolved over the centuries.

As for the second question, the short answer is simply that the letters do not correspond to what we have programmed into our brains. It’s amazing how long it takes to link a second image to a concept we expect to look completely differently. I find it almost harder than learning foreign words. But independent of this fact, I think the main stumbling block is the rather up and down nature of particular letters, which make them all look the same. To make matters worse, the most notorious culprits are also letters that typically follow one another, that is, lower-case c,e, m, n, r. The lower-case and upper-case v, w, x and y are also a bit of a challenge, as are upper-case B, C (I swear they can’t be anything but an L).  This is not to mention the letters h (which still looks like an f to me) and s, which has three forms, the first looking frustratingly like h and f, and the other two taking prizes for weirdness. The problem is of course compounded by the idiosyncrasies of each person’s handwriting. It doesn’t always look as neat as in the following table:

So how should one tackle this whole process? I would say it is a matter of how “fluent” one wants to become. In my case, I simply needed to decipher individual words and phrases, and so I developed my own set of “tricks,” many of which are similar to those described in this highly recommended post by SK Translations, “Ten tips for deciphering German handwriting.”

If you really want to delve into the process, maybe even learn to write as well as read Kurrent, then I would suggest the three free interactive courses offered by the Family History Learning Center. In fact, maybe it’s time I knuckled down and spent more time at it myself…